About Cobalt and Walnut

About Joanna
I went back and forth on whether I was going to start blogging again as we embarked on our first custom build journey in April 2019. I debated continuing on my first blog, which chronicled our adventures renovating an old house over the course of eight years, but that always felt like its own self-contained story. The last post seemed like a happy ending.

That blog was about the house; this blog is about a life: my projects, my garden, my adventures scavenging stuff out of old barns and on the side of the road. Probably there will be a smattering of dog and baking and other miscellany, and obviously, a lot about this first build and everything that follows. I often like making stuff instead of buying it, usually because I have a clear vision in mind. I have a respectable little collection of power tools and a trusty truck that has hauled such notable acquisitions as a 1960s-era tank of a jointer and a tree stump that's about 24" in diameter. Someday soon, I'd like to learn to weld.

Why Cobalt & Walnut?
I'll be honest: I was walking through Target shortly before I named this blog and had the thought that everything these days is "'x' & 'y,'" though it's almost always a + instead of an &. And then I found myself trying to come up with a name for this blog, and knew if I didn't just pick something that I would never get started.

Todd and I brainstormed for about 7 minutes and then after shooting down all his ideas, I arbitrarily picked two things I love: the color cobalt blue, to which I have an undying devotion, and walnut, which is my favorite wood to work with. The grain and color are stunning, I love how it smells (though you should NOT breathe wood dust, and definitely not walnut because that shit is toxic) and one time a few summers ago, the frozen yogurt place had walnut froyo and it was one of my favorites ever. Plus, now that the word is out about the internet, there aren't all that many domain names left. Lo and behold, cobaltandwalnut.com was available, so it was clearly in the stars. (Is that a thing? I don't really do stars, so...I probably shouldn't reference it.)

So, if you asked me if I was going to blog about our build and what unfolds beyond that, the answer is now "yes." Welcome to Cobalt and Walnut.

Thanks for stopping by :) 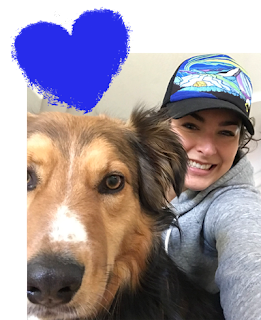