One of the things that's been fun but hard and intimidating is figuring out how to configure bathrooms. I don't mean floor plans, since that's already done. I mean, how does the sink placement dictate where the light fixtures need to go, and how mirror size impacts those things, and don't forget things you need to work around, like light switches or outlets, or other little details I'm not thinking of. This was what I was working on with the master bath over the weekend.

When you come in the front door and turn left, this is the little hallway to our bedroom. (The hole in the ceiling is a return.) 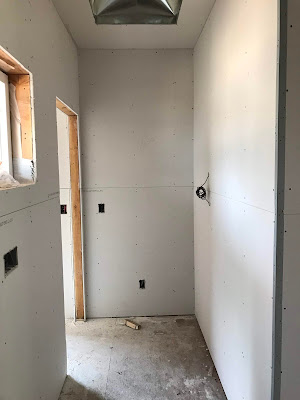 Go left, and this is what you see. The bathroom and closet are that doorway on the right side. Bed will go between the two windows. 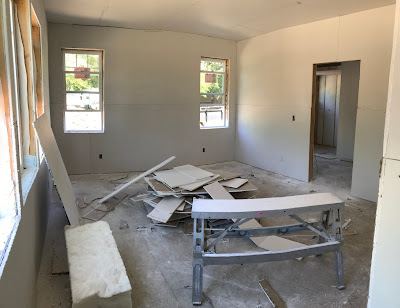 Standing in the bathroom doorway, you look out the front of the house. Not exactly optimal placement for our bedroom and bathroom, but it was what made the most sense, given the other goals we had. 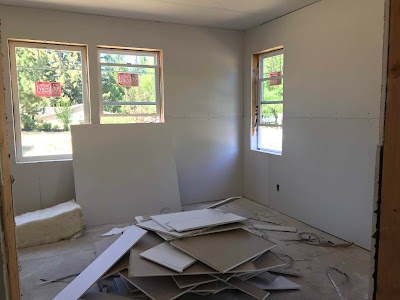 With that lovely bank of windows, obviously plantings and window treatments are a priority. 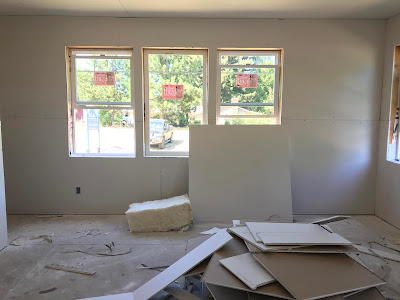 When you look in the bathroom, the toilet closet is right in front of you (that's the wall in the picture below) and the shower is left of that. The vanity is on the wall facing the shower. There's a cabinet above the shower (in that open gap). I decided to drop the ceiling in the shower because I wanted it fully enclosed, a steam shower without the steam module. 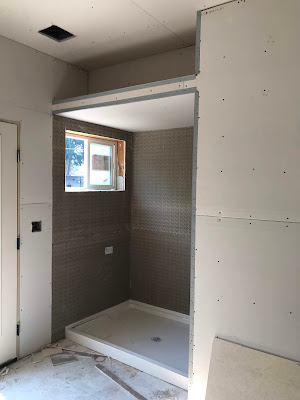 Nine-foot ceilings are really high to enclose, which means glass would be $$$$. (As it is, it's probably going to be around $2k, and I really don't want to know what two extra feet would have added.) It eliminated two feet of tile, made the glass cheaper and provided an extra cabinet. Win, win, win.

I opted for a shower pan instead of tile, because I have this weird preference for living my life instead of spending every waking hour scrubbing grout with bleach and a toothbrush. Wish it could have been a little wider, but it still came out to about 48"x60", which is about twice the size of the shower in the house we've been renting. I kind of want to put a potted tree in the shower. We'll see if Todd goes for it. Might be too cramped.

The shower has a frameless glass front with a transom cut into the glass, which will allow it to vent directly to the exhaust fan above it. Here's a diagram... 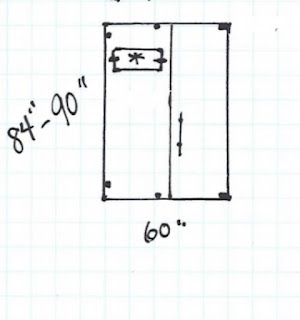 This is a really crummy shot of our closet and where it extends under the stairs. One of my very favorite things about this custom process is being able to capture space that's often left dead. I'm bummed we weren't able to make a dog den under the first stair landing, but Baxter is too big to fit into a space that's about 16" tall. Oh well. Anyway, the closet isn't huge, but with a 9' ceiling, there's a ton of vertical space. I'm just starting to plan that out now. 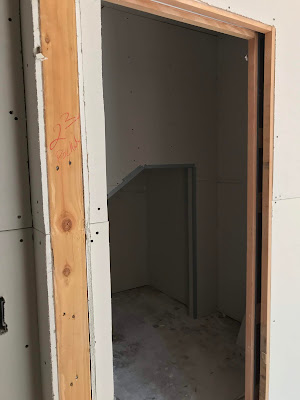 Here's the view standing in the closet, looking at our vanity/sconce/mirror configuration. Three sconces, and we decided to go with mirrors at the height on the left. Again, OMG, 9' ceilings are so tall!! 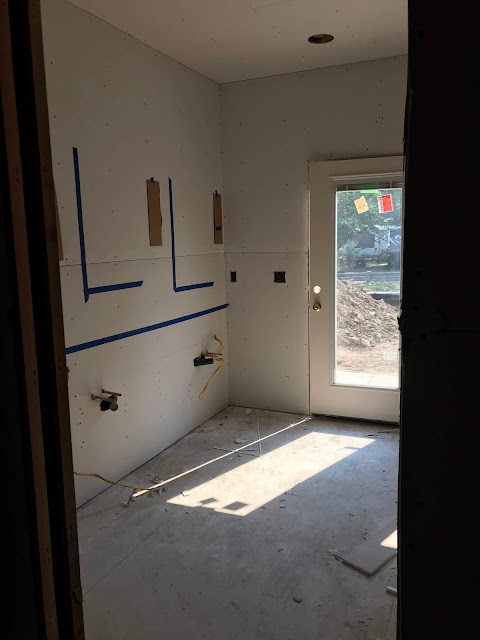 And in case you're wondering, the door has blinds inside the glass. That Chinese proverb about the best time to plant a tree was 20 years ago...yeah. That. In the meantime, blinds and lattice.
Labels: construction Jville house master bathroom