So, here's something I suspect most homeowners are not saying to their contractors: "You guys are moving too fast, and it's hard to keep up with everything that's going on." And I doubt most contractors ever respond, "Yeah, I haven't been putting too much pressure on them to move faster, so that we can catch all the details before it's too late." This is an actual exchange I had with our GC last week. Here's where we're at (as of yesterday morning, anyway):
This was taken standing in the middle of the back of the house. There's a spot that bumps out a couple of feet from the back (see the plan for reference), and that's where I was. The kitchen is on the left, and fireplace and the doors out to the patio are on the right. Just to the left of the stairs is the entryway, and then at the end of that hallway to the right is our master bedroom.

We're working on figuring out the stairs right now. Because we decided to use LVP flooring and we're keeping the staircase open (meaning, the spindles will sit directly on the steps), there's a little trickiness involved in getting the stair treads right.

The stairs will get their own post. Stairs are shockingly complicated, and as an important focal point for most of the downstairs, I really want to make sure they're dialed. I'm including the following picture as a reference point for the one after this. Go up the stairs so you're standing with your back to the windows at the top... 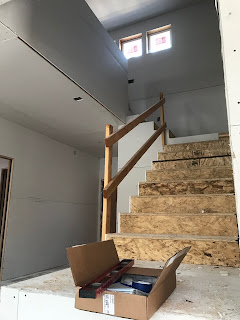 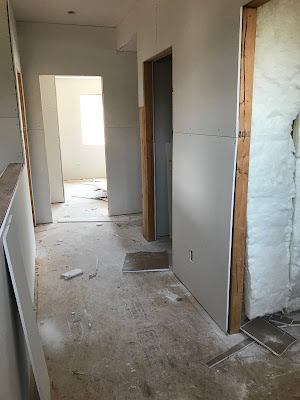 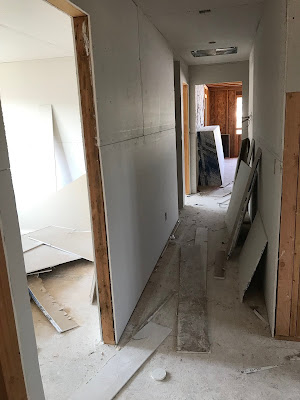 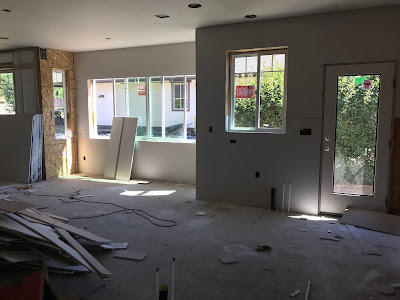 And here's the outside, as of yesterday: 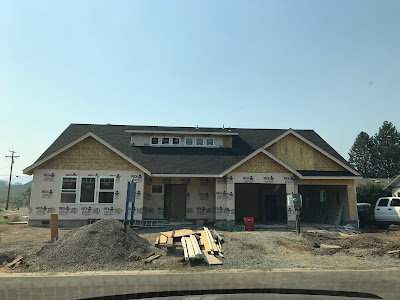