Yesterday, some things crystallized for me. This bathroom has been my lowest priority, despite the fact that because it's upstairs where our offices are, it will be the bathroom I use the most. We decided early on to use the same LVP flooring we're putting in downstairs, so I knew it would have a "wood" floor, and then after that, I kind of forgot about it until a week or two ago.

The kitchen counter bid came in, and they'd put the same dark gray stone in the master and upstairs. When I asked why (because the master was supposed to be light) they said they didn't have enough material from the kitchen to also do the master, and neither of my choices came in a half-slab, so I'd have to buy TWO extra slabs if the two bathrooms didn't share the same stone. If this sounds expensive, it's because it would have been. Luckily I'd had a suggestion about tracking down a remnant for upstairs (bonus: on my hunt yesterday, I also found one for downstairs!) Finding that gray remnant made the rest of the plan come into focus.

Here's the plan for this bathroom. Please, try not to be intimidated by my mastery of Photoshop. 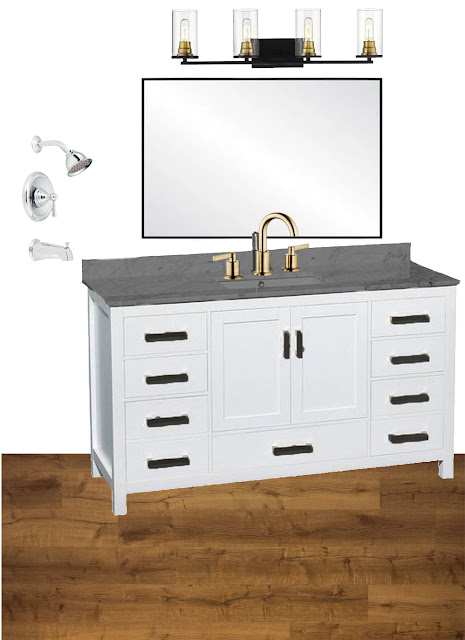 First off, there's a lot of metal mixing happening here. It would have just been black and brass, buuuutttt the shower faucet in brass was something like twice as much as the chrome. I figured it would probably be hidden behind the shower curtain anyway, so decided to go with chrome.

Faucet is a cheap one I found on Amazon. The color is supposed to be a deep, warm brass. If I don't like it, I'll use this one from Lowe's. We're using the single-handle version in matte black in our master. The color is more of a pale champagne gold, but I think it'll still work. Also, faucets are relatively easy to swap out.
I'm going to do black hardware on the vanity to temper some of the sweetness of a white vanity, and a vanity light that's both black and brass to tie the whole shebang together. I'm not sure if it will be that exact light, but I do like that one because it's $25 less than what I'd expected to spend. I'd just have to frost or paint the clear shades.

The vanity has been sprayed (I just got to see it today!) and looks as good as a vanity without drawers or a top could be expected to. It has a cabinet in the middle and drawers on the sides. I kind of wish I'd asked them to do more traditional base on this, but I forgot until I saw it. Still looks good.
Ok, so, this remnant vanity top. While baking in 95-degree muggy Midwest-like heat, I found what turned out to be a remnant of flint. It's a pretty medium gray and I have my fingers crossed the texture is ok. I forgot to consider that yesterday and am going back tomorrow morning to check. So it'll be topped either with the flint or with a piece of medium gray quartz. They also had a half-slab of white marble with crazy gray veining (way more intense than your average Calacatta). I considered this briefly but then remembered we had marble in our last bathroom and it was kind of a nuisance. So, flint it (probably) is.

I also found a remnant of a rather boring white quartz with a bit of gray veining, which I'm going to use for our master bath. Cost should come in around half or less than what these counters were going to cost in the original bid, plus I really prefer using different stones in each location. More intentional, less cookie-cutter.
Ok, last thing. I am not totally sure this is a sane idea, but I'm thinking about doing a marble-printed cultured marble as the shower surround (think like how Pergo was a photograph of wood...but...like, it looks good). 48 hours ago, I absolutely would have said that was simple lunacy, but then I looked at a sample, and I was flabbergasted by how good and convincing it looks. It looks so good I considered using it for our master shower, too. I could happily look at it every day and not contemplate how fake it looks. Anyway, that would be a statement for this bathroom. Just waiting on a cost estimate on that.

Originally, we were going to put in a fiberglass surround and upgrade to tile later, but then I decided to put in a 66" bathtub. Normal tubs are 60". Want to guess how many 66" fiberglass surrounds there are? If you guessed zero, you get a cookie. So now my choices are either spend 6k to tile the guest shower (no) or to come up with a cheaper way, hence the investigation into cultured marble. I'm sooo curious to see where this leads.