Last summer, Todd and I bought the cutest little 500ish SF house, with an adorable little $90k price tag to match. It's on a pretty big lot (though most lots would seem big if they just had an original tiny house plus rickety garage on them.) For being built in the 1920s, it was in exceptional shape and mostly needed cosmetic fixes. We had a friend who immediately wanted to rent it from us, so we painted inside and out and replaced the floors and that was it for the first year.

Our friend moved out in June and I requested two months to work on projects. This rather unfortunately coincided with our house build sucking exponentially more of my time, and two months turned into five, and I finally just finished the deck and a few things inside so that our investment property can start making money, instead of us investing into it. In the last few months, here's what I've done:

Painted the front door. It was a fine but low-contrast dark gray. I was going to go with a spunky yellow (I love a red door, but the red-white-and-blue combo was a little too patriotic), but when I was picking paint chips, I was kind of drawn to this Magnolia green, olive grove or olive branch or something...olive. I looked at the chips for a few weeks and remained drawn to the green, so I went with it.
See, did I not tell you it was so adorable?!

Painted the insides of the bathroom doors black. It has a jack and jill bathroom, the doors were in kind of rough shape and I happened to have most of a quart of black gloss with me. I thought more contrast would look great, especially with the newly installed vintage knobs (which was another project that required 3+ trips to a local used building materials place, including one that had me haul a door in). The bathroom doors were mysteriously missing knobs when we bought the place, so that obviously had to be addressed.
Todd isn't super into brass on black, but looking at this, I am feeling very inclined to put brass hardware on our black kitchen cabinets. (Update! Todd has agreed to antique brass hardware for our kitchen!) Also, this first plate was covered in chippy old white paint when I bought it. I slathered it up with Barkeeper's Friend and left it in the sink for an hour, and the paint slid right off. 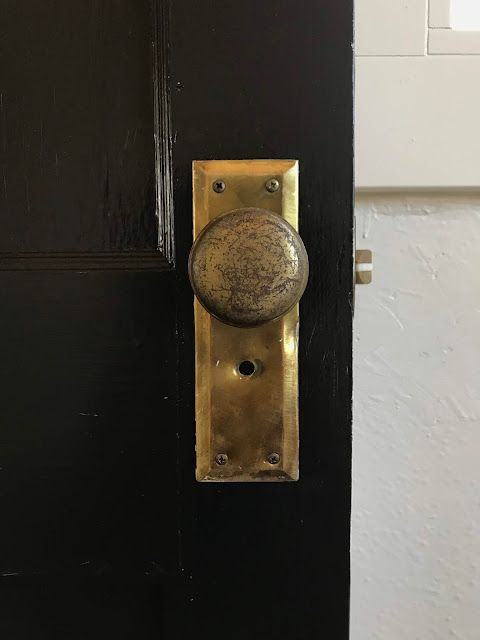 The other door is more copper. Also very pretty. 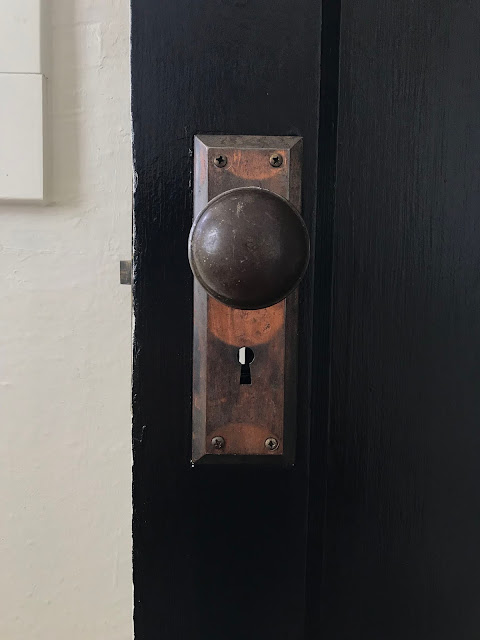 For reference, this is the family room. Front door is the left black door (we painted that last year) and the bedroom with the copper knob is that doorway on the right. 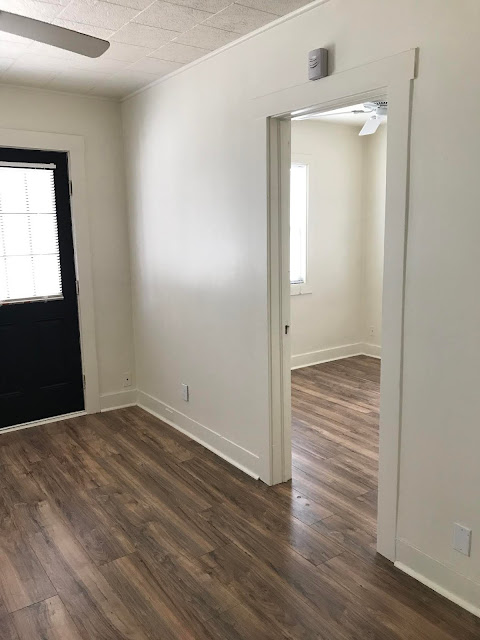 The floor is laminate, and it looks darn good in person. No issues so far with it. Also, this house gets the dreamiest light for most of the day. I think it's helped by the fact that every room faces outside. It's magical. 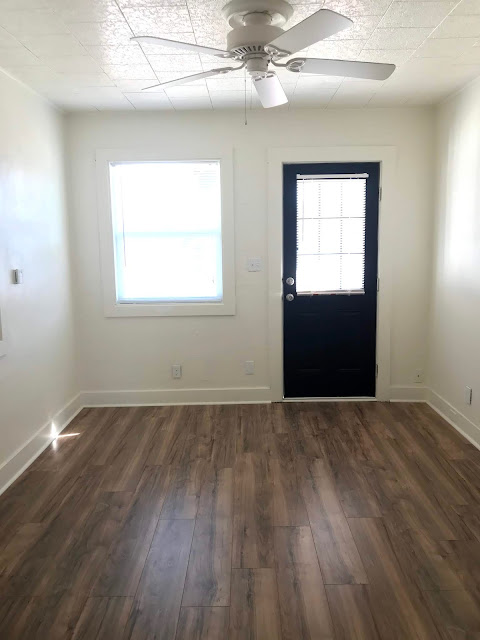 Swapped the bathroom light fixture, charming as it was... and obviously painted the ceiling and removed water stains. Tip: bleach. I learned this at our Hillcrest house, which had some really bad water stains. You can't really prime over them because they come back through the primer, and the best way I've found to get rid of them is wiping with straight bleach on a sponge. Always wear safety glasses, duh.
Trimmed out the beadboard paneling around the ceiling in the kitchen with quarter round, caulked and painted.

Patched and painted around the newly reinstalled windows. The south bedroom had a window a/c, and the north bedroom basically had plywood filling the space where there was a window at one point. It was what one might call a subpar construction job, as you could see daylight through cracks around the plywood. (This house also had a missing shingle, which someone creatively patched with a random hunk of laminate flooring.) We had windows put back in, which required a bit of cleanup...
So much patching and touch-up painting. So. Much. I got wise a few years ago and now wear kneepads for this kind of work. It was a good 6 hours of caulking and painting and scuttling around on my knees. Ouch. But few things have the visual ROI that a good caulk and paint job does, so I'd say it was time well spent. Banged-up baseboard is one of the essential elements of the housing project aesthetic; it just looks so incredibly crappy. It is the spinach in the teeth of an otherwise impeccably dressed person. All touched-up, everything now looks so fresh and crisp.

Installed a bunch of mini-blinds, which is a job that is somehow simple and annoyingly complicated. It requires a certain amount of attention if you're not going to do something dumb like install the brackets the wrong direction and then puzzle over whether the blind is supposed to hang outside the bracket so much, before realizing you drilled a bunch of unnecessary holes in the window trim you just spent time patching and painting. Obviously, I have no experience doing such things.

Put up little hooks in the laundry room. They are cuter than they should be, and I think should also be very functional for whoever lives there. 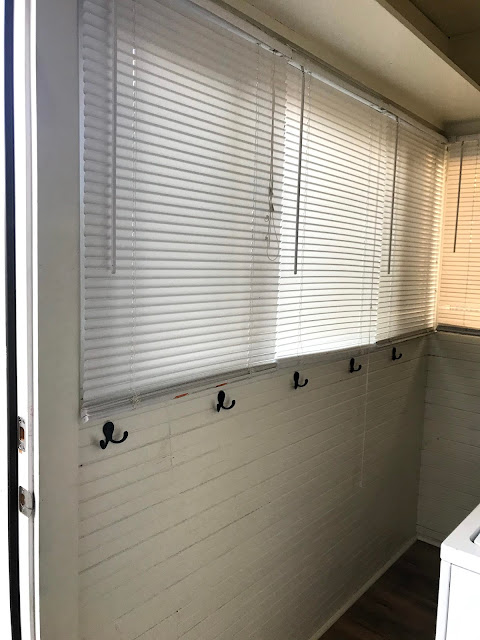 So this is what I tackled inside. Outside, you can read about how Adam and I built a deck.
Labels: Maple St. rental projects