Rental Gets a Deck

This post could also have been titled "how I bit off more than I probably should have project-wise and ended up spending at least 4 full weekends on my hands and knees getting cozy with my impact driver, belt sander and skilsaw while my back screamed at me you can't do computer work 5 days a week and pretend to be a construction worker on the weekend, bring me more Advil NOW," but that would have been kind of a run-on. Somehow I have digressed before I even started. 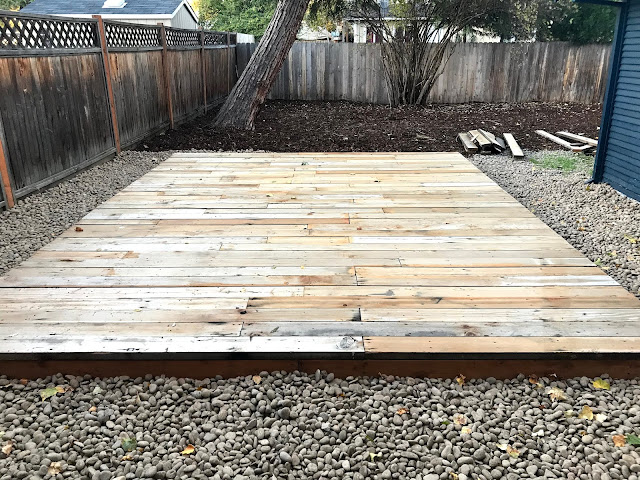 Last summer, we bought a tiny house as an investment property. It's about 500 square feet and adorable. It somehow manages to squeeze in two bedrooms, a full bath, a small living room, a kitchen and a laundry room.

While it was largely in good shape, there was some maintenance we had to catch up on, so most of our expenditures thus far have gone into boring stuff. We also painted inside and out, replaced the floor, replaced a couple windows and ripped out the mostly-weeds front yard.

The tenant we had for the last year had wanted to build a deck but didn't get to it. I decided that was a good idea and a great way to extend the rather limited living space the house offered.
I kept thinking, I think I can do this. But I've been burned thinking that before, so I proceeded with caution with my plans. I watched a great video on YouTube and sketched some rough plans. My friend Adam helped plan and execute as only a fellow ISTJ could.

I spent the better part of a week ripping nails out of and planing the "free" redwood I'd acquired from a deck our contractor ripped out of someone else's house. (Note: things are not free if you have to spend hours and hours refining the material into something usable.)
We got the blocks level and started laying out the wood on a July Friday morning. I wasn't expecting it, but that was the trickiest part. 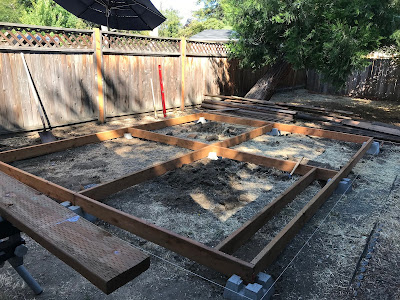 I wanted to keep the deck as close to the ground as possible, mainly for safety so we didn't have to put a railing around it. By Saturday midday, we'd gotten the frame built. I went back Monday morning and screwed all the joists into place (Adam had tacked them with a brad nailer).

Being first-time deck builders, we didn't realize that we could have screwed the joists in from the sides so we didn't have them offset on one side. It being a rental, I didn't care to invest an extra $100 into this project to use joist hangers, but might do so in the future. 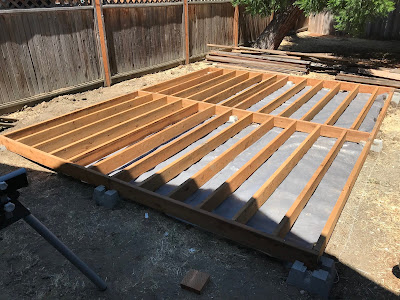 At that point, I totally thought the hard part was behind me. I was...not right. The thing about using a limited amount of reclaimed lumber of all different lengths is that getting it to fit and minimizing waste is like a giant jigsaw puzzle.

Every board has to end on a joist so it can be screwed in, and that means if I have lengths of, say, 59", that might be 11" of waste because it's just shy of a full foot. I ended up sistering scraps onto some joists to minimize waste (totally a professional technique 🤥) but it was slow going. 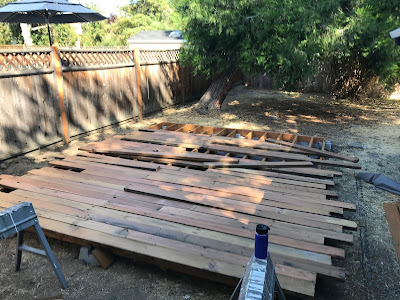 Like, I started in July and finished the last weekend in October, slow going. I lost count of how many times my massage therapist asked "are you done with that #@*$%! deck yet?" But now, after more weekend afternoons than I intended on investing, the rental has a pretty decent-looking deck. 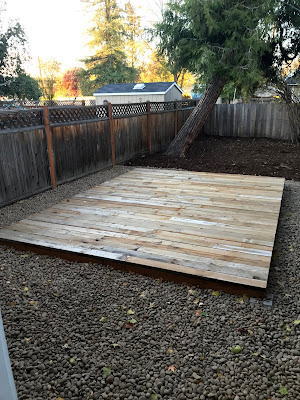 I do wish we'd had the foresight to bury the deck blocks or put them under the frame, but...oh well. Lessons you learn along the way.