The time I pack-ratted my way to towel bars

When we moved almost two (!) months (!!) ago, I was forced to face the reality that while I'd sold, donated and unloaded a lot of our inside house stuff since we moved from Hillcrest, there had apparently been an inverse correlation with how much I'd acquired in terms of wood and tools. The garage was straight-up horrifying. I didn't even take a picture of it, it was so bad.

Because my parents are the best ever, they came to help us move. I think I would still be tripping in circles (there was no wandering) in the garage of our rental, trying to figure out how get it all to our house, if my dad hadn't handled the process. Two 15-foot box trucks later, all my stuff was taking up the equivalent of another two-car garage: my shop and my truck's bay.
Now, there was a lot of wood and a lot of tools, but don't be fooled. There was all kinds of other junk, too. Because of some of the types of projects I dabble in, I end up accumulating really weird stuff. Example: if you mold concrete bowls and planter pots, you will need assorted plastic molds, concrete mix, gravel, spray oil, a concrete-covered trowel and perhaps some weirdly shaped pieces of wood that were used to ensure containers were level while curing. Among other things. This was a minor-league hoarder situation.

Ok, so, the other night night, I went to start installing the towel bars that finally arrived for our bathroom. They're on the back of the bathroom door, so they had to be kind of specifically sized, ideally 28". 30" would work but be a little odd, but because 30" was what appeared to be the standard size, that's what I ordered. What I got were 31.5" bars. Delightful.

The brackets detached from the rod, so I figured I'd just use a hacksaw and cut the rod down. I succeeded in scratching the powder coat off the rod and possibly dulling my saw blade. Strike two for towel bar installation. But then, THEN I remembered that over the summer, I'd made a very weird and inadvertent acquisition. 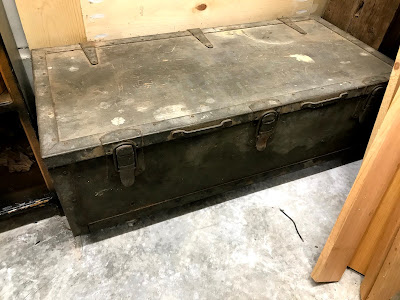 It was at an estate sale, and the lady told me I could have it for $5, but I had to take what was inside of it. Ok....? It's hard to tell from the picture, but the thing is on steel casters. For good reason. Inside, is this...fascinating collection of objects. It weighs probably 75 lbs. If we had more time, I'd take guesses on the contents and hand out a prize for the winner, but I'm too impatient. 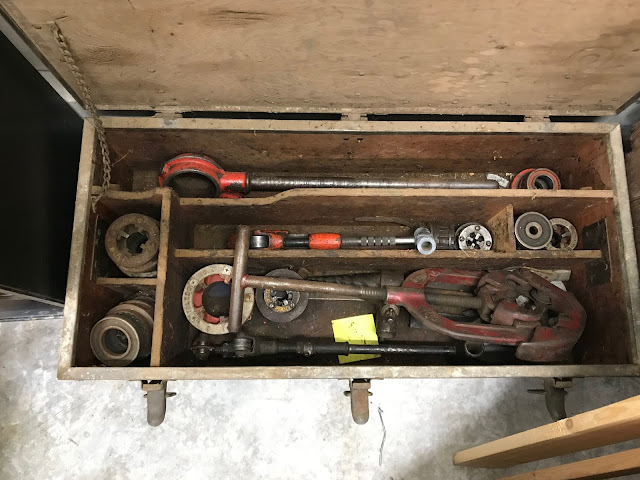 This, my friends, is a weird trunk full of industrial pipe-cutting supplies. There may be other things in there; I wouldn't know, because I don't know what most of these objects are. What I do know is that there was a pipe cutter. So once I located the trunk under a pile of wood in the garage, I made short work of the too-long towel rods. 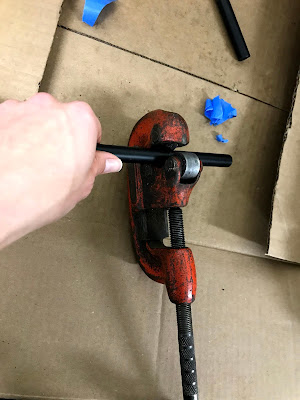 My packrattiness has never paid off so gloriously. And now, we have towel bars in our bathroom. (Also, still some tape on the walls indicating where paint touch-ups need to happen, but one thing at a time.) 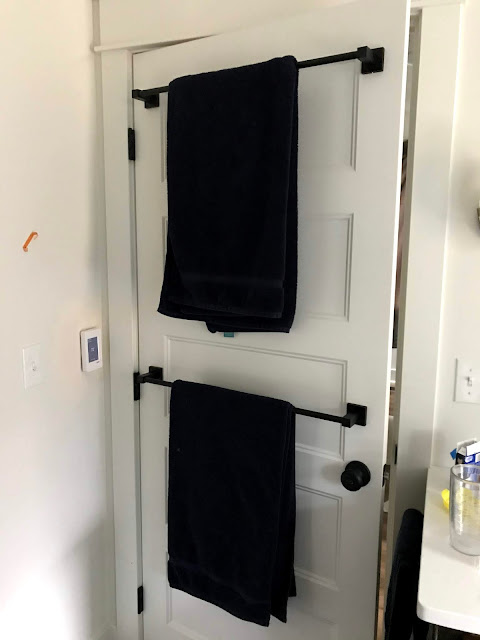