Hi, I'm Joanna, and I made my dog his own playroom. I feel like I should be more embarrassed to say this than I am, but also, I am embarrassed, so, yeah. Moving on, I guess... 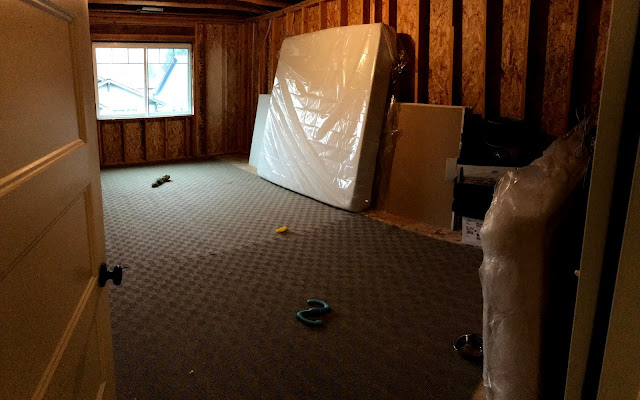 I submit that it's impossible to not crack a smile or snicker when you hear "rumpus room." We didn't have one growing up. Rooms were the family room, living room and basement. The basement likely would have qualified, but it wasn't in the Shoe fam vernacular. (We aren't a family of creative naming conventions. Once, my siblings and I asked my mom what we called this frozen dessert she'd made since the beginning of time, composed of crushed Oreo crust, a layer of mint chip ice cream and a layer of Cool Whip topping. She paused, blinked twice, and stated, "ice cream dessert.")

So anyway, serious digression before I even got started. Costco had some cheap indoor/outdoor rugs, we had an empty, unfinished bonus room and Baxter had lost the huge open living room he used for entertaining (snort) at the rental we were in. Other than the knuckle I scraped open while securing the carpet to the subfloor, this was a win all around. 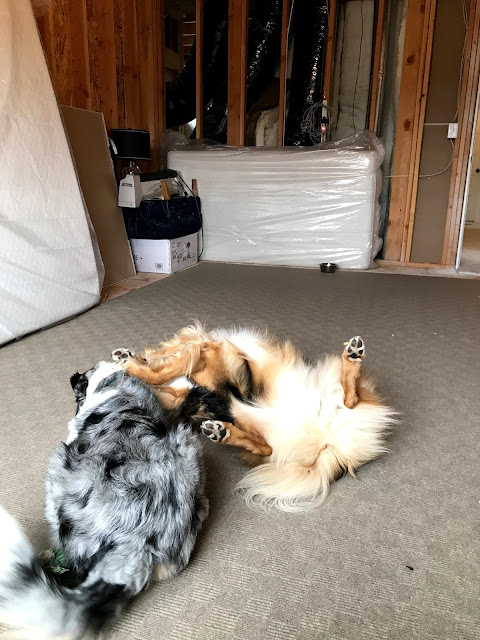 Since our sod really needs to be not walked on as much as possible, turning this into an indoor dog rumpus room made a lot of sense. He plays with his brother Oliver occasionally and sister Lola (in the picture above) once or twice a week, and this also gave us a pretty good 35-foot ball run from the far end of the hallway into this room. And a good place to keep the messy, fluff-shedding, mostly destroyed toys he loves.

As I'm writing this, Baxter and Lola are zooming up and down the hall, growling and biting each other. From downstairs, it sounds like the carpet is being ripped up by angry gorillas. And tonight, I'm looking forward to a tired pup.
Labels: Jville house Jville house bonus room projects