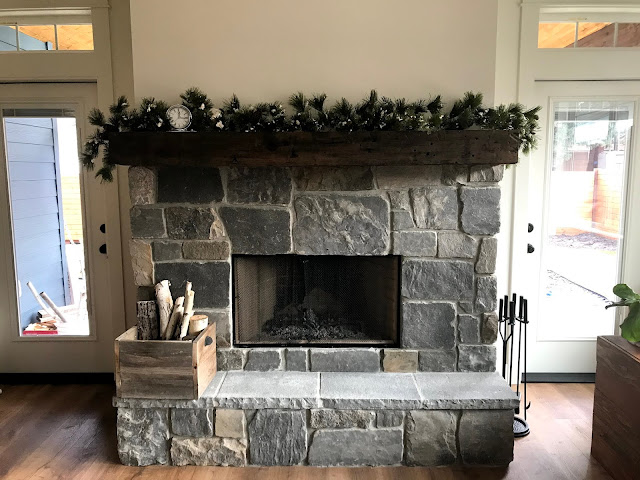 Several months back, I'd been trying to figure out what to do for the mantels in our house build and simultaneously trying to figure out where to stash this large beam that was the back yard of our rental property, when suddenly I realized I could solve both problems at once. It was 10"x14" and about 8' long. I suspected it was a railroad tie, which would render it useless for anything indoors, but then I looked it over more closely.
It didn't smell, and railroad ties always smell like tar and chemicals. Hmm. So I scraped a bit off with my penknife, and the wood was rather pretty and dark underneath the outside layer. Double hmm. Redwood? I asked a few other people and the consensus was...yeah...looks like it. Other than having some nails and this other piece of wood nailed to it, it was starting to look like an excellent candidate for not one but both of my mantels.

One of the lumberyards in town (Rogue Pacific) ripped it in half for me, so I got two 6x10" pieces (give or take). After cutting, they sanded it with a dust flap, which cleaned up the splinters but left some the...history...intact. This last picture shows more of the texture. The circle is just where I was noting it needed to be trimmed back to make a flat edge for the back. 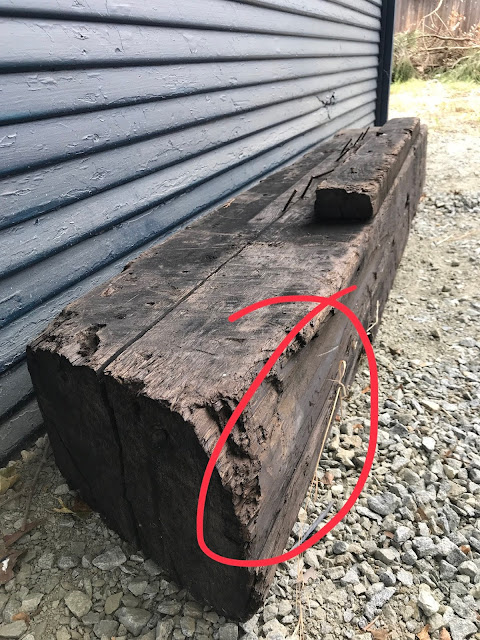 They were so great to work with and incredibly accommodating of my helicopter-parent check-ins. There was only one of these beams, no second chances. I know you'll find this hard to believe, but I was a grade-A nuisance, texting, stopping by to check progress, investigating what tools and techniques were being used, just generally pesky.

Bruce hung them using Sheppard Brackets, which were recommended by the guys at Rogue. When the fireplaces were being framed in, back in May or June, I hadn't made a mantel decision yet, so I told them to block everything in so I could hang a railroad tie on the wall if I wanted. I didn't want to have to think at all about how much weight these could hold. I think they were also glued in place on the rods, so it's a good thing I like them, because I'm pretty sure they are not coming out.
I would have been fine if the wood was a little less rustic, but it also sticks out more right now because the rest of the house is so spare (no art, no rugs, minimal decor).
So that's the story of the sort-of-free mantels. I like my stuff to have stories. I wish I knew where the beam came from and what it was before it got left behind our rental's garage, but a little story is better than nothing.
Labels: Jville house scavenged finds