After 6 unnecessary holes in the wall, 4 separate hanging attempts, 2 defective, funhouse-grade mirrors and countless hours invested in attempting to hang our bathroom mirrors, I could not be more gleeful to be writing this post.

I bought these mirrors in December, one of which was great, and the other had a warp in it. Perfect. Ship back, request replacement. Next mirror, also warped. 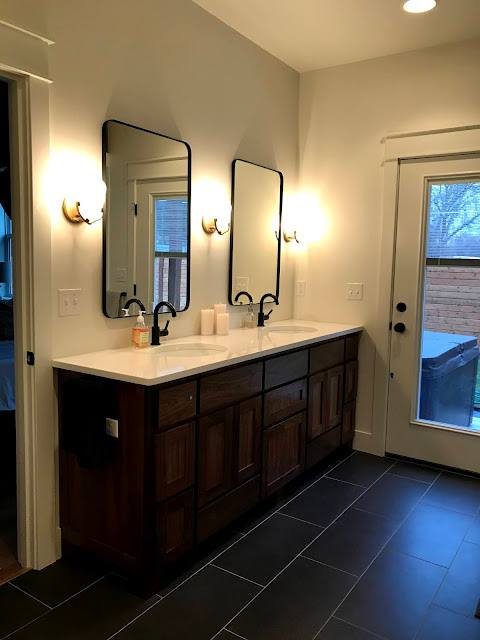 At this point, I had already been looking for other rounded rectangle mirrors, and had run into a snag: the backs of the faucets were less than 2" from the wall. This severely limited my choices, since a lot of these had frames that were 2" deep. (Not to mention, I picked these mirrors in the first place because the RH and Pottery Barn options were over $300 each, which was a bit of a budget buster.) So, I really needed to get TWO mirrors that weren't warped.

Luckily, as they say, third time's the charm. My third replacement mirror had a very slight warp, which I only noticed because I was being super picky. (It also has a bent corner, which I noticed after hanging it, and I was not about to take it down and go through this song and dance again.) My next challenge was hanging the damn things. They came with D-rings on the back, which are fundamentally impossible to get level. If you have done it, I don't want to hear from you. It cannot be done, and you are a liar.

After my previous failed attempts, I bought a couple of aluminum french cleats, which, OMG!!! were also defective. This project couldn't have been more ill-fated. They come with a little leveling bubble, and for reasons I chose not to think too much about, ended up somehow not level. I fixed this using my actual level. Once the leveling was done, the hanging part was easy, and a lot more secure than some crappy D-rings. I still get a burst of joy every time I look at the mirrors on the wall.

And in case you're wondering, here's what the other side of the bathroom looks like. I still haven't picked hardware for the vanity or cabinets, which makes using the drawers a rather annoying task (soft-close drawers are pretty hard to pry open), but otherwise am super happy with the layout and function.
Hot tip on maintaining your glass and tile: wipe dry with a microfiber car wash towel after every shower. Yes, it's a bit of a pain. It is nowhere near the wildly annoying job of scrubbing discolored grout or removing mineral buildup from glass. Plus, sparkling clean glass and tile EVERY DAY!