Yeah, I know. It's a brand new house, what is there to renovate? Well, as I may or may not have mentioned, we left three (technically four) rooms unfinished upstairs. There were reasons, but hindsight is 20/20 and we really wish we would have just finished the whole house last year when it was being built. Anyway, starting mid-May, the upstairs went back under construction to finish out our bonus room, "room of requirement" and guest room, which adjoins to the unfinished en suite, should we or someone else decide to finish that in the future.
This is what you see when you come up the stairs. Todd's office is straight ahead, the guest room is on the left at the end, the bathroom is down the hall on the right, and the tiny room is immediately to the right. We just had the carpet rinsed with hot water in hopes of decreasing the smell, and I felt like I was ruining a new snowfall by walking on it. Everything up here is WHITE, including the carpet. The pictures make it look a little taupe or cream or something else, but it is icy white. I love it. 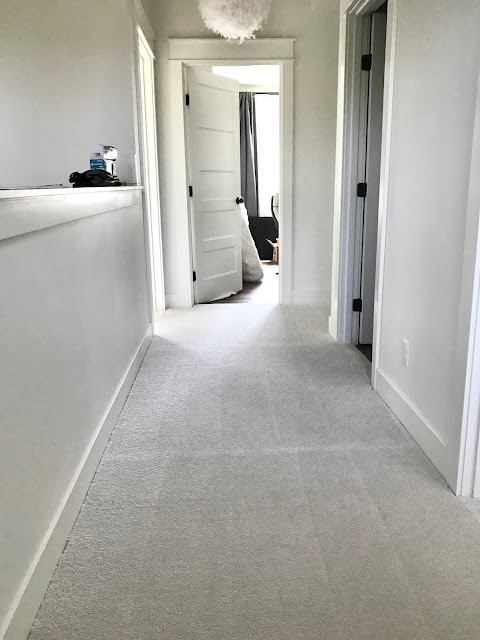 The "room of requirement" doesn't have a defined purpose. It's at the top of the stairs and is tiny. The windows are 2x2, which aren't big enough for egress, so it can't officially be a bedroom even though it has a small closet. Could be a den, a workout room, someone could even sleep in there. But it's not a bedroom. Cough. 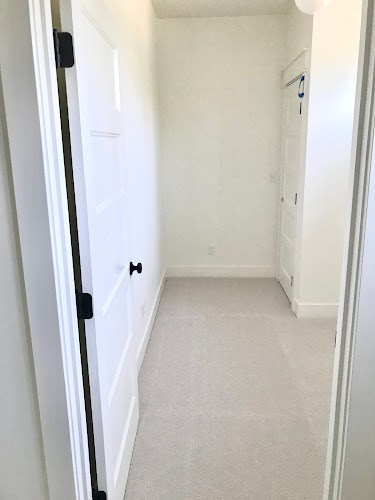 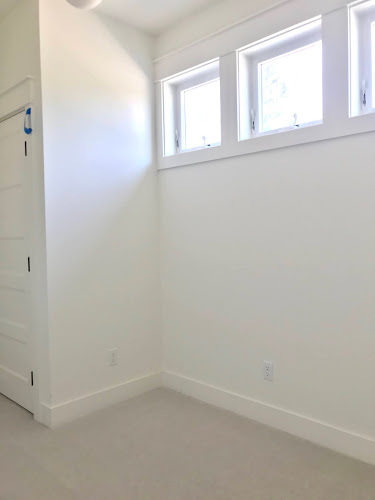 The bonus room is where we envision spending a lot of time this fall and winter, comfy on a couch that has yet to be selected or ordered. It has a lovely view of the mountains to the west and is the only room from which you can watch the sunset. It served briefly as Baxter's rumpus room, but has obviously been reclaimed for the humans. 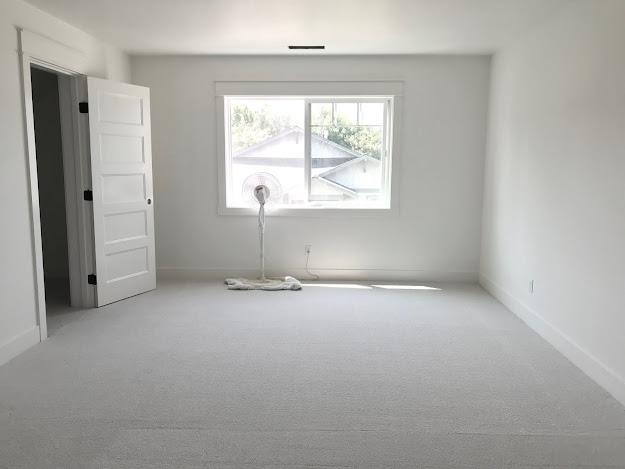 It also ended up with this monster closet, which is 10x12'. Even though it's under the sloped part of the roof, you can still stand up in half of it (the white stripe running through the middle of the picture below is a wrapped beam to support the roof, and you can stand anywhere in front of that without banging your head on the ceiling).
The bonus room will be getting a bar cabinet, which will have a small sink, microwave and minifridge. You can see the stubbed plumbing and drain in the lower right corner of the facing wall. I need to finalize my design and get it to the cabinet guy. I'm also going to be constructing the counter out of some eucalyptus 2x6s I acquired a few years ago. 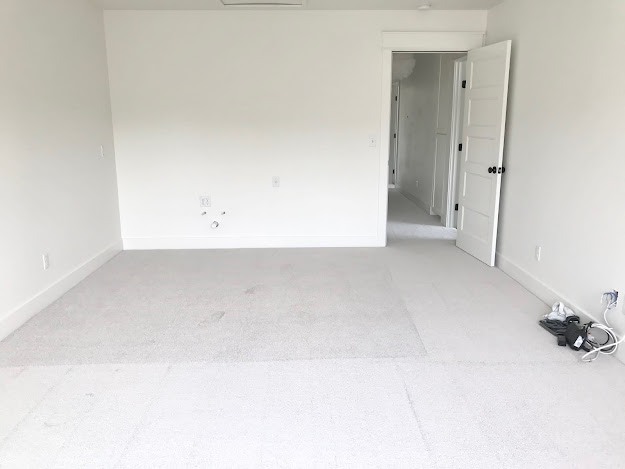 The guest room has a view of the nearby vineyard, which covers a hill just across the street. We insulated the crap out of all of these rooms using Rockwool insulation, but for this room, we also used something called sound channels, which create a buffer between drywall that's screwed to the studs and an outer layer of drywall. So it's insulation/studs, drywall, RC sound channels, drywall. The goal was to make this room as quiet as possible in case we want to use it as our bedroom at some point. We don't know if we've succeeded yet because...
Carpet. We replaced the hall carpet to match what was going into the other three rooms: extremely cushy, fluffy white carpet over an extremely comfy memory foam pad. It is PLUSH. It's like walking on a cloud.
Unfortunately, that cloud also smells horrible and is still off-gassing, over three weeks after being installed. So we've had the windows open with fans blowing out pretty much since it went in. We couldn't sleep in the house the first night, and we've avoided being upstairs, which was easier the last two weeks while we were on vacation and may prove a bit more complicated now that we're supposed to be working in our offices (upstairs).
In any case, construction is now nearly done. Or it is done for a while, until the bar cabinet gets installed, and that could be a few months. We're eagerly waiting for the stupid carpet to stop poisoning us while enjoying the fact that we don't have guys tramping through our house making noise and dust all day.
Labels: Jville guest room Jville house Jville house bonus room Jville house R of R